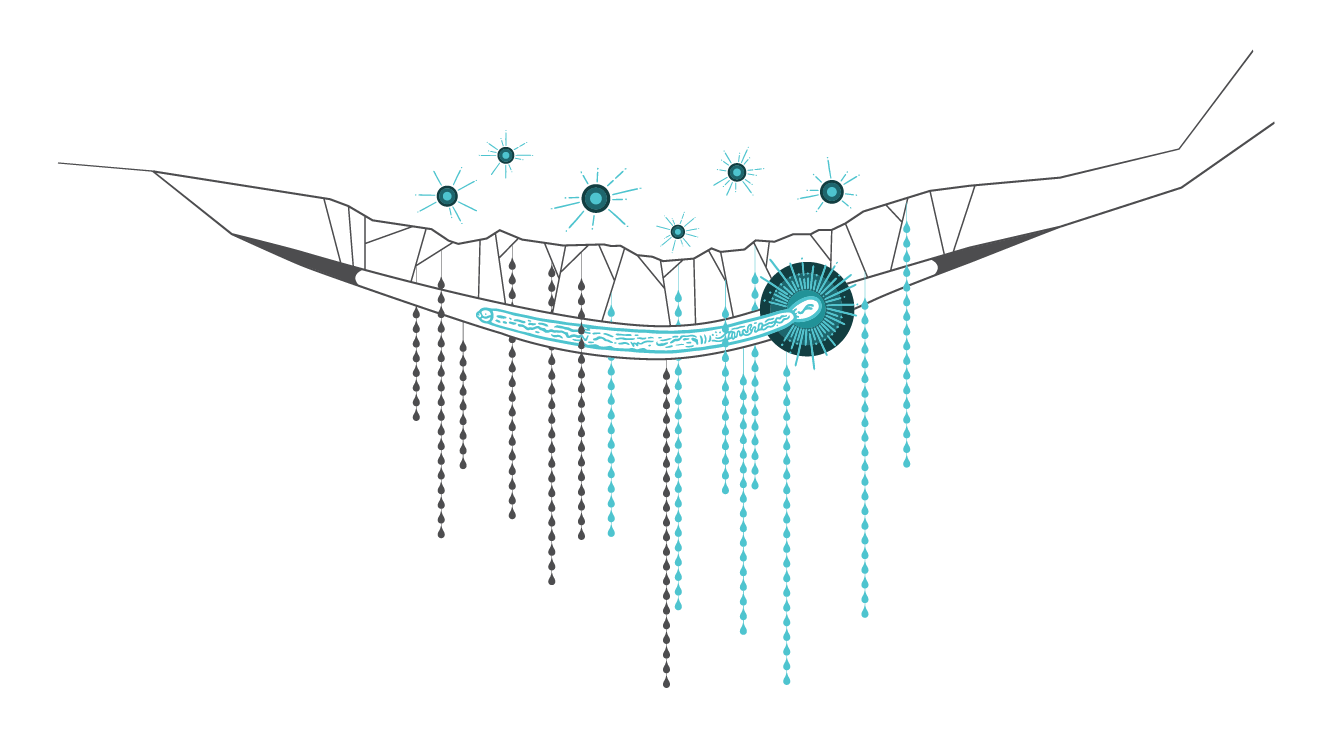 Charismatic, alluring, magical…glow-worms bring people much joy and happiness. Australia has eight species of glow-worms in the genus Arachnocampa and collectively they are our 2023 Australian Cave Animal of the Year.

Glow-worms are not worms at all. They are insects and, more specifically tiny flies, that have a four-stage lifecycle of egg, larva, pupa and adult.

The best-known part of glow-worm life is the larval stage where colonies of glow-worms have large numbers of beautiful blue lights often seen in dark places like damp caves and rainforests.

The scientific name of glow-worms describes some of the key features of the larval stage.

Needing moist, cool habitat to survive, Australian glow-worms are only found in selected areas of the eastern states. Perhaps they were more widespread in previous climatic conditions but retreated to their current locations as the Australian climate warmed and dried. Isolated from other glow-worm populations, the eight different species that have now been described evolved their own physical peculiarities that differentiate them from each other.

Here's a quick introduction to our eight species.

The genus has a ninth species, the well-known Arachnocampa luminosa which is only found in New Zealand and, despite some differences, is closely related to the Australian species.

Fireflies which also glow, are found in many areas, and are often called ‘glow-worms’. But these are immature winged beetles and not closely related at all to Arachnocampa.

If it wasn’t for their spell-binding lights, unless you’re an entomologist or cave explorer, glow-worms would generally go unnoticed by people. Glow-worms are the larvae of a fly, and we generally don’t pay much attention to flies unless they are pestering us. We certainly don’t marvel at maggots which are the larvae of houseflies. But we become enthralled, lost in time with all cares forgotten, at the enchanting lights of glow-worms.

It’s a total myth that glow-worm lights are caused by glow-worms burning their waste.

It’s a fanciful and often-repeated myth, that many of us have heard on cave tours and some of us were taught at school, that the glow-worm’s light is caused by the animal burning its waste products. Wrong.

The myth probably has its origins in that the glow-worms light is produced in its tail, and in a structure called the Malpighian tubules. The Malpighian tubules do have light-producing cells as well as excretory cells, but they operate separately. The excretory cells regulate electrolytes and so function a little like a human kidney. And as for ‘pooping’, the glow-worm lowers its rear down one of its threads or ‘fishing lines’ and excretes its waste there. There is no link between waste removal and light production.

A glow-worm’s light is produced by a complex mix of anatomy and chemistry.

The light-producing cells in the Malpighian tubules are surrounded by a thin layer of respiratory tissue. The tissue draws in oxygen and works as a reflector by directing the light downwards. Oxygen combines with the enzyme luciferase, which is made in the light producing cells; luciferin, which is a light-producing substance; and adenosine triphosphate (ATP) which is a metabolic agent for transporting energy in cells.

Scientists studying glow-worms do not yet fully understand the exact chemical reaction of the light production, but it produces light without heat and is very energy efficient.

The glow-worm controls its light and it can be brightened, dimmed or turned off. Glow-worm lights seem to be brightest when insect life is most abundant.

Glow-worms have neither a hard shell or thick skin and cannot survive high temperatures, low humidity or wind. Any of these would dry the glow-worm out. A moist cave, sheltered overhang, railway cutting, rainforest gully or abandoned tunnel (with limited air flow) are all suitable glow-worm homes.

Glow-worms also require nearby running water as habitat for small flying insects that will become their food supply. The less polluted the water the better, as it will support a greater variety and quantities of insect life.

The glow-worm’s beauty is a lure to death.

While humans marvel at the spectacle of glow-worm lights, for small flying insects the lights are a lure to their death. Insects such as mosquitoes, moths, springtails and caddis flies are drawn to glow-worm lights and become trapped in the sticky mucus threads or ‘fishing lines’ that the glow-worm builds. Once trapped, the insects are now on the glow-worm’s dinner plate.

The threads and nest are produced in the glow-worm’s mouth where salivary glands produce silk. First the glow-worm larva produces its tubular nest that it can move along, and then it makes about 70 sticky silk threads that are suspended from the nest, with droplets of mucus arranged on the threads. The threads vary in length from about a couple of centimetres to about 50 centimetres. The less air movement at a site, the longer the threads.

One researcher has suggested that the mucus drops on the glow-worm threads may have an anaesthetic effect on prey. The glow-worm can pull the thread in towards it with a series of contractile movements, and then secure the prey by producing some bracing threads and attaching these to the prey. The glow-worm then slides partially out of its nest and extends itself down the thread towards the prey. The prey is then gripped in the glow-worm’s mandibles (jaws) and sawn into suitable lengths by its teeth. Once the prey is in small enough pieces the glow-worm sucks the juices out of it and then chews up the tougher portions. Any uneaten part of the prey is lowered onto a thread which the glow-worm cuts off and discards. Likewise, the glow-worm cuts off a thread after it has excreted its ‘poop’ onto it. Glow-worms readily make new threads and are continually replacing and maintaining their threads. Having the threads in good working order is an essential part of assisting their food supply.

Behind the glow-worm’s lights are three other life stages.

The larval stage is the longest, most obvious and most admired stage of glow-worm life. Like most of insect life, the other three stages of glow-worm life don’t draw a lot of public fascination.

The glow-worm larva gradually changes to the pupa, which is like the glow-worm version of a teenager, a transition period from child to adult.

The change from larva to pupa commences with the larva removing its threads, these are now redundant as the adult does not eat. Also, the threads could be hazardous and entrap the adult when it emerges from the pupal case. The larva also constructs a circle of shorter threads around its nest, and these are thought to offer protection allowing the adult glow-worm time to emerge and dry its wings without being eaten by another cave invertebrate.

During pupation the larva structures of the glow-worm become absorbed into the body and adult structures such as wings, legs, antennae and eyes form. Female pupa form eggs in the abdomen.

A short life for adult glow-worms

Adult glow-worms do not feed and only live for a few days. Males die soon after copulation and females soon after egg laying.

The eggs are a link between the generations.

The female lays about 130 sticky eggs which may be laid singly or in clusters, and generally on the edge of existing glow-worm colonies. Not all the eggs will survive—they may become food for other cave animals such as beetles, spiders and other insects. The eggs take varying times of one to three weeks to hatch, shorter periods in the northern climates and this is thought to be due to ambient temperature variations.

Larvae hatching from eggs vary between three and six millimetres in size and the tiny larva find somewhere to attach themselves and immediately commence building their nest and threads. They need to do this pronto to obtain food and protect themselves from drying out and being eaten.

A new generation of glow-worms has commenced, and people lucky enough to see them will be enthralled by their tiny glowing lights in the darkness.

Where to see glow-worms in Australia?

This list is not exhaustive and includes places where glow-worms are readily visible in caves, forests or abandoned tunnels. Forest areas need to be visited after dark to see the glow-worms.

We wrote a small book. It’s called Living Lights—The Glowworms of Australia and New Zealand, by Cathie Plowman with David Merritt. Purchase from the author at: @email

David Merritt is an Associate Professor at the University of Queensland and has spent decades involved in the study of glow-worm physiology and behaviour. Visit his website: Merritt Lab

You can enjoy glow-worms and help promote them and other Australian cave animals. We’ve got glow-worm merchandise to celebrate out 2023 Australian Cave Animal of the Year. Get in touch about our bookmarks, stickers and posters at: @email

There are some beautiful videos of glow-worms on YouTube. 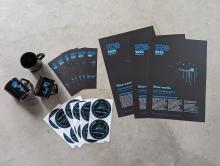 Help grow appreciation for cave animals by displaying a poster and sharing the bookmarks and stickers with your friends. 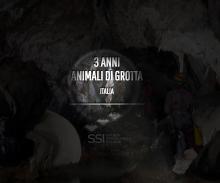 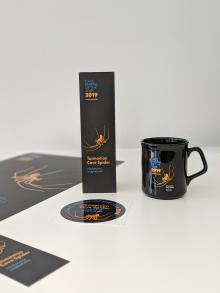 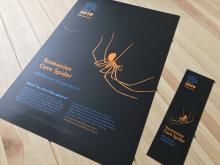